Agent Walks Away Unscathed After Geekmobile is Buried Under Gravel

As Geek Squad Agent Brandon Majors made a left turn in his Geekmobile last week near Peru, Indiana, he noticed something out of the corner of his eye — a big, red dump truck. And it was barreling toward him.

Agent Majors attempted a last-second U-turn to avoid a crash. The truck – with a full load of limestone gravel – swerved, overturned and smashed on top of the Geekmobile before skidding to a stop. 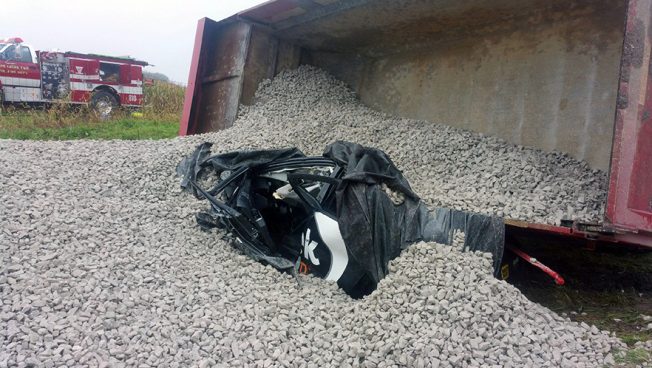 The 26-year-old found himself trapped under all the rock and wreckage. Not even the highly rated Toyota Prius c could escape this kind of impact – the roof of the Geekmobile was folded down in front of Agent Majors’ face and chest and across his lap. Yet he miraculously walked away with no injuries.

“The best way I can think to describe it is, it was almost like an action figure in shrink wrap, that’s how the car crumbled around me,” said Agent Majors, who is 6-foot-2 and about 200 pounds. “There was only a very small gap all the way around me that I could barely move in.”

‘Amazingly, I was completely unscathed’

Agent Majors checked to make sure he could feel his arms and legs. It was pitch black inside the vehicle, except for a small glimmer of light from one of the rear windows. Then he started to make noise to alert others that he was alive.

“I thought, ‘Oh my gosh, they’re not going to know I’m here,’” he said. “So I started banging on what was left of the roof of the car in front of me, and I started yelling for help. I could hear gravel crunching under people’s feet, and then I heard someone starting to dig.”

After finally clearing enough gravel to access the car, firefighters cut off the driver’s door. A firefighter reached out his hand, and Agent Majors pulled himself out.

An ambulance took him to a local hospital, and he underwent a series of X-rays and tests.

“Surprisingly, I was completely unscathed,” he said. “The emergency room doctor told me to take some ibuprofen and just take it easy for a few days. I’ve been a bit sore and stiff, but other than that, I can’t complain.”

And, amazingly, Agent Majors returned to work on Monday after taking four days off.

“I’m hoping my clientele in the area will understand,” he said.

If they get one look at a photo of the accident scene, that shouldn’t be a problem.