One day while driving to work at the Best Buy in Emeryville, California, Phil Bohol noticed a group of homeless people. Several appeared to be military veterans, still wearing parts of their service uniforms. 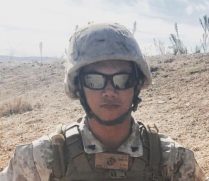 Phil served seven years in the U.S. Marines, and seeing other vets struggling broke his heart. So he enlisted six Best Buy co-workers who also served in the military to help raise money in a GoFundMe campaign to buy blankets, hygiene kits, sleeping bags and more for homeless veterans in the area.

“I want to do whatever I can to help remind these heroes that they are not forgotten, especially at a time of year when family is a focus for so many,” said Phil, a Pacific Sales manager at the store.

For Phil, the military is his family. He completed numerous leadership courses where he was able to work closely with his fellow Marines and guide them through personal and professional growth.

Now, he hopes to make a difference in the lives of the homeless vets in his community. Nationwide, nearly 40,000 veterans experience homelessness nationwide, according to the U.S. Department of Housing and Urban Development.

“Phil is passionate about the military and the people who have served for this country. He truly wants to give back,” said Chris Cooley, Phil’s general manager at the Best Buy store in Emeryville, California. “Phil has a passion to help the homeless vets and change the way we look at this problem.”