Canadian employee defends boys getting bullied on the train

Nina Safaei wishes someone had stood up for her when she was being bullied in high school. So, when she saw two boys being harassed by another passenger aboard a commuter train, she didn’t hesitate to step in.

Nina was riding the train in Vancouver, British Columbia, recently when she noticed a man becoming agitated toward two boys who were playfully enjoying their ride. Then, he pushed one of them.

“I was angry and sad and shaking when I saw it happening,” Nina recalls. “I said to him, ‘You should be ashamed of the way you talk to these kids.’”

Nina summoned for help, but the man got off the train before security arrived.

It was a traumatic experience for the Trovato brothers, ages 10 and 15. Enrique, the younger of the two, was shocked and scared to see his older brother, Matteo, get pushed. Matteo has special needs and will have to rely on public transportation like trains and busses as he gets older.

“Enrique has often asked, ‘Why did that man push Matteo? Why would he be so mean? Couldn’t he see Matteo had special needs?’” said Michelle, the boys’ mother.

After the man left, Nina was determined to do more to support Enrique and Matteo. She talked to the care provider accompanying the boys, handed them her phone number and started brainstorming about how Best Buy could help.

Manek Mavalvalla, general manager of the Best Buy store where Nina works, supported her in inviting the Trovato family for a special day at the store where Best Buy could shower the boys with fun, kindness and gifts.

“My sons were overwhelmed by the experience at Best Buy. They couldn’t understand what they had done to deserve all the amazing gifts and kind words,” Michelle said. “Matteo loves looking at the pictures of that day. When he looks at Nina’s picture, he always says, ‘That’s my friend!’” 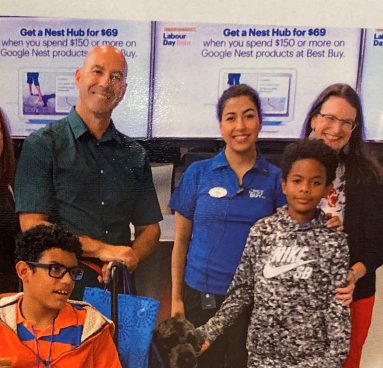 Michelle and her husband, who live in Vancouver, adopted Matteo and Enrique from the United States when both boys were infants. It was a special way to grow their family, and in Matteo’s case, it was the beginning of a journey the couple hadn’t planned on, but one they wouldn’t change.

Over time, they learned more about the depth and breadth of Matteo’s disabilities — and his abilities. Matteo is visually impaired and nonverbal, suffers from a seizure disorder, has Cerebral Palsy and uses a wheelchair. But who he is goes far beyond his challenges.

“He is the happiest child I’ve ever met,” Michelle said. “He adores babies and fancy cars. And he never complains about his life. He has taught me more in his lifetime than I’ll ever be able to teach him.”

Meanwhile, Michelle describes Enrique as having the biggest heart of any child she’s ever known.

“And I’m a 23-year high school teacher, so I’ve known many,” she said, noting that Enrique is kind, gentle, inquisitive and has a strong sense of social justice, especially as it pertains to the treatment of people with special needs.

Michelle said the train incident led to family discussions about what happened, as well as about whether the man had special needs himself and responded inappropriately, or whether he was just having a bad day. But no matter what the cause could be, the family chooses to focus on the good stuff — on good people like Nina.

“A beautiful young woman took it upon herself to become my son’s voice. She became everything I’ve ever hoped for in our community, Matteo’s protector, and in that moment a caretaker,” Michelle said. “She showed Enrique the strength and courage it takes to stand up for others. She became a role model for them about how we should all interact in society. And she earned a big place in our hearts.”

Nina made good — and then some — on her promise to defend people experiencing bullying, and she would do it again if needed.

“We are all human and all kids have the right to be happy,” she said. “And I won’t ever stop standing up for them!”