First the phones rang, then the wedding bells 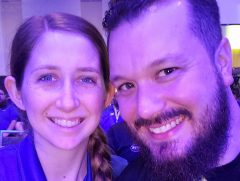 Jake Briolat launched his Best Buy career in 2010 in Lakeland, Florida, and several years later was promoted to a store in nearby Davenport.

Meanwhile, Sarah Gifford began her career at Best Buy in 2016 in Davenport, but was eventually promoted and relocated to Lakeland. Co-workers suggested she call Jake to learn more about Lakeland, the store he knew well.

Online gaming to in-person gaming, talking over the phone to talking over dinner, the two quickly knew they were meant to be.

In December 2018, the couple took a road trip to St. Augustine, Florida, their favorite place in the Sunshine State, to explore the holiday lights.

Though the nighttime lights seemed like the ideal proposal story, Jake took his dad’s suggestion. “If I could give you any advice, make sure you do it early” his dad said, because you want to make her entire day, not the end of it.

With a ring in his pocket, Jake asked a few bystanders to take their picture in front of a large Christmas tree. “By the way, I’m about to propose” he added, giving them a little more pressure to capture the moment.

Just like Jake’s father promised, Sarah said, “Yes!” and the rest of the day was “like our own little fantasy,” Jake said.

To follow their longstanding tradition, the two took a picture at the end of the day in the same place they started. This time, the moon was out, the tree was lit and they were happily engaged.

Something borrowed, but nothing blue

Jake and Sarah tied the knot on June 29.

Though Jake’s general manager, Mary Syfrett, said Jake “100% bleeds blue,” he didn’t get his way to incorporate Best Buy’s color into their special day. Sarah preferred a day off and went with light pinks to better fit the non-retail scenery.

They exchanged their vows overlooking the mountains in New Hampshire, which was close to Sarah’s family and allowed everyone they love to enjoy the special day together.

Despite the distance, their friends came at the drop of a hat ­— on 29 different flights — to support the couple.

Thanks to Best Buy, Sarah and Jake’s journey went from dating to wedding real quick. As Sarah put it, “When you know, you know.”