From the farm to Best Buy, 3 brothers still work together

Gerald, Greg and Gene Hartmann learned the meaning of hard work while growing up on a dairy farm in Lakeville, Minnesota, about 25 miles south of Minneapolis.

“You had to work together a lot. One person can’t bail hay or milk the cows,” said Gene, the youngest of 10 children. “You all had your chores to do, and they had to be done at a certain time. It was a lot of discipline, really.”

Now in their 50s, the Hartmann brothers are still working together, only now they’re bringing that farm-instilled discipline to their jobs at Best Buy’s distribution center in Bloomington, Minnesota. Collectively, the three of them have worked there for more than 90 years. (Three other siblings have also worked for the company over the years.)

Gene, 50, is an operations manager, serving as a key member of the leadership team —although he doesn’t oversee his brothers. Gerald, 53, works in inventory control, and Greg, 57, is a mechanic.

“The term work ethic sounds cliché, but it’s hard to articulate how they carry those values of hard work, dedication, loyalty and commitment to the people around them here every day,” said Shawn Bergeth, who runs the distribution center. “They have different areas of responsibility, but they’re all seen as role models and strong leaders within the building.” 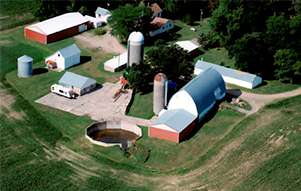 The farm where the Hartmann brothers grew up has been in the family since 1868. Their great-great grandpa homesteaded the land after immigrating to the U.S. from Germany, and their dad, grandpa and great-grandpa all grew up there. Dad passed away 15 years ago, but their 84-year-old mom still lives there.

“When you grow up on a farm that’s been there forever, you know where you came from,” Gerald said. “There’s so much history there.”

At its peak, the farm spanned about 600 acres and had as many as 60 cows for milking and 500 hens for laying eggs.

The Hartmann kids woke up early every day to milk cows, go to school and come home for more chores. They’d wrap up around 7:30 p.m. at the earliest, and there were times when they had to plow through the night.

“We didn’t have big equipment, but we had a lot of labor,” Gene said.

They also did a lot of additional work for other farmers in the area. After all, not everyone had five boys in the family. “That’s just how we were raised. If anybody needed help, you go help them,” Greg said.

There weren’t many days off, either. The Hartmanns would visit their great aunt’s cabin every Fourth of July, but they had to be home by 5 p.m. for chores. They spent spring breaks working in the fields and summer vacations bailing hay.

Still, there were perks. The Hartmann brothers fondly recalled the hot dishes and foil-wrapped hamburgers their mom made. There was always fresh beef and chicken, and they drank milk straight from the tanks (about 5% milk fat).

“There are a lot of good memories there and not many bad ones,” Gerald said.

Gerald began working at Best Buy in 1984, when the company had fewer than a dozen stores, compared to about 1,000 today. Gene started in 1986, and Greg joined them eight years later.

Still after working 25 years together, you won’t hear them talking shop at family gatherings. “Family get-togethers are for family time,” Gene said.

Best Buy is a far cry from a family farm, but the Hartmanns see similarities in the mindset they bring to their work.

“With the farming background, we don’t leave till everything is done for the day,” Gene said. “It’s almost like milking cows. Maybe that’s why we’ve all been here so long.”

And, just like on the farm, there are times of the year when the workload increases. It’s not uncommon to work long shifts, seven days a week at the distribution center over the holidays.

But the Hartmanns don’t complain.

“We like working here,” Gerald said. “It’s a lot easier than bailing hay, picking up rock on a windy day or stacking hay in a hot barn.”

Click here for more information about jobs at Best Buy.