They say love is patient. And in the case of Tonya and Tharun Trammel, it waited quietly on the sidelines for over a decade.

For 15 years, Tonya and Tharun worked side by side as co-workers at the Best Buy store in Independence, Missouri. They didn’t chat much until the death of a mutual friend started to draw them together in 2012. In the years that followed, each went through a divorce.

“We both struggled through a dark period of our lives, but instead of grieving alone, we chose to find comfort in one another,” Tharun said.

Over the next five years, the two became inseparable, celebrating all of life’s biggest events and day-to-day successes together. Even their families had developed a close bond, so much so that Tonya’s children began to refer to Tharun by the superhero-inspired nickname of “BatDad.”

Then, in 2017, Tonya “took a leap of faith” and decided to make their relationship official.

“Tharun told me he loved me, he loved my children as his own and wanted to become more than friends” said Tonya. “That was the beginning of our official love story.”

And it wasn’t just those two who were excited about the big news.

“We were all impatiently waiting for this friendship to turn into an amazing relationship,” said Stefanie Speers, a longtime Best Buy co-worker. “It’s like the whole world was just watching and waiting for those two to realize that they were perfect for each other.”

An engagement soon followed, which quickly prompted wedding plans. But there weren’t many options that had what they needed: availability during a  pandemic.

A cozy courthouse service is what they originally had in mind, until Tonya put her head-over-heels hat on.

“Our life, our entire story is based around Best Buy,” she said. “Why not get married here?”

Their general manager, Kevin Imlay, was immediately on board.

“I said, ‘You know what, I think we could make that happen,’” he recalled. “And, just like that, it all came together in about a week.”

So, their “something borrowed” turned out to be the sales floor in their Missouri store, which also happened to provide a whole lot of “something blue.”

Aisle stand by you

At the time, this Best Buy location was appointment only and had limited shopping hours. So, on the evening of June 12, instead of the typical flow of customers and tech sales, it was love that filled the air.

After the store closed for the night, socially distanced chairs were set up in the main aisle, among Best Buy products, the couple’s favorite colors and, of course, many of their favorite people.

Their guests filled seats until safe capacity was reached, and the rest of the attendees waited patiently in the parking lot for the newlyweds to make their grand entrance afterwards.

“We were allowed to have about 50 people in the store, and, of those, about half were our colleagues.” Tharun said. “Overall, about 80% of our guests were either former or present Best Buy associates.”

Tharun, who fancied up in a yellow Best Buy shirt and white shorts, waited eagerly at the makeshift altar and watched as his best men (Tonya’s two sons) and the maids of honor (Tonya’s two daughters) walked down the aisle. Finally, he laid eyes on Tonya, who stunned in her blue Best Buy shirt and a white skirt as she glided her way through the guests.

When Tonya and Tharun met at the altar, their longtime co-worker Stefanie Speers, was the one to make the marriage official.

“I’ve known them both for so long. I know the hardships they went through and everything that led up to this point,” said Stefanie, who was delighted to add that personal touch to the in-store ceremony. “I know who they are as individuals and now I’m proud to know them as a couple.”

Although no one dreams of wearing a face covering while walking down the aisle, the Trammels’ special day was more than they could have ever imagined.

“Our friendship bloomed into a love and partnership right here in front of all of our co-workers turned family,” said the couple. “It was the perfect way to bring everyone together to celebrate this once-in-a-lifetime love.” 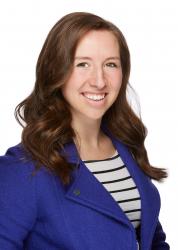