She got a part-time job at the Bay Ridge Library when she was 15 years old, helping visitors check out and return books. Then, in March 2019, a new Best Buy Teen Tech Center opened at the Kings Highway Library, and Nadine was hired to run it.

“I never had specific career goals. I just wanted a job that would allow me to keep a roof over my head,” she said. “It’s awesome that with no charted path, I managed to land a position that is so rewarding.”

She hopes that she — and the library — can play a special role in the lives of a new generation of students who visit.

As a Teen Tech Center coordinator, not only does Nadine get to introduce teens to possibilities for their future they may have never otherwise considered, she gets to be the mentor that she would have liked to have.

“High school was super stressful. I was working and moving around a lot, so my grades weren’t great,” Nadine said. “I didn’t have an adult mentor around to listen when I was struggling or upset. A safe space to go would have been nice.”

Nadine has warm childhood memories of growing up at her grandparent’s house in Brooklyn’s South Slope neighborhood. She remembers listening to her grandfather sing old Spanish songs and watching her grandmother prep ingredients for traditional Puerto Rican meals.

“I loved being in the kitchen with family,” Nadine said. “When I was 5 years old, my grandma would let me sit at the table while the adults talked. She’d put a little bit of coffee in a cup for me, so I felt included.”

But when Nadine was 12, her grandparents left Brooklyn for Florida, and that’s around the time she started struggling with her personal life. Her experiences have made her more empathetic to what youth at the Teen Tech Center might be going through.

“Teens go through a lot, and sometimes they need to talk it out,” Nadine said. “It’s my job, as a mentor, to make them feel safe to express their feelings, talk and be curious.”

A space of their own

Beyond boasting a suite of technology, Nadine says the atmosphere and vibe at the library is a big draw for teens. Fritzi Bodenheimer, the press officer for all 59 branches of Brooklyn Public Library, agrees.

“Libraries don’t fit that old-school perception of being quiet and stuffy anymore,” Fritzi said. “In fact, they are very lively with lots of activities, programs and events for our patrons.”

At the Kings Highway Library, there is even more. The Teen Tech Center there has a wide range of tech for teens to use, including a free recording studio, drawing tablets, sewing machines and 3D printers.

“If you visit libraries across the country, you’ll likely find spaces designated for kids or adults, but not for teens,” Nadine said. “The Teen Tech Center gives them that space to call their own, where they will feel safe and encouraged to learn, collaborate and communicate.”

Consistency is another factor that drives students to show up. Given her unsteady upbringing, Nadine knows how important that can be for youth.

“I’m there to help them discover what excites them,” she said.

As for Nadine, she also continues to grow and learn new skills at the Teen Tech Center.

“I love problem-solving and learning alongside the youth and letting them teach me new things,” she said. “Before I became the coordinator, I’d never been in a recording studio, used a sewing machine or operated a 3D printer. Now I can troubleshoot and show the teens how to create using all kinds of cool tech.”

In support of the city’s efforts to limit the spread of COVID-19, most of our Best Buy Teen Tech Center locations —including the one in Brooklyn — are closed until further notice. Watch this video to see how Teen Tech Center coordinators are supporting teens during this time. 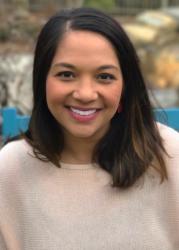