Desiray Perez started as a seasonal worker at our Best Buy regional distribution center in Dinuba, California, when she was 18 years old. Now, she’s entering her seventh holiday season — her first as the facility’s inventory control coordinator.

She worked part-time at the center for about five years while going to school and caring for her young son. She’s been full-time for about a year now and was recently promoted to the coordinator role. Her goal is to become a manager.

“At first, I was just looking for seasonal work to help me buy a car. Now this is how I support my family,” she said. “If you invest in your work daily and take pride in what you’re doing, that doesn’t go unnoticed.”

She’s one of thousands of Best Buy employees who started out as a seasonal worker and moved to full time. In fact, more than 30 percent of full-time Best Buy employees started as temporary workers before moving into permanent roles.

Now, Best Buy is gearing up for the holidays by hiring thousands of seasonal employees in our stores and distribution centers across the country. We’re hosting a national holiday hiring fair, which includes on-the-spot interviews, on Wednesday, Oct. 17, at all stores. People looking for a fun and rewarding job, or just looking for extra cash can apply in-person or online for jobs ranging from sales and customer service to merchandising and inventory.

Yvonne Sivard, general manager at Store 880 in Wooster, Ohio, has been with Best Buy for 11 years. She began as a seasonal worker and has since held roles in the warehouse, home theater and mobile departments.

“When I started, I knew I wanted to work my way up,” she said. “I’ve had to reinvent myself every time I’ve switched leadership positions, because every position takes a different type of person.”

While Best Buy provided her the opportunities to achieve her career dreams, Yvonne has in turn mentored many employees to help them accomplish their own goals.

“Some people want to move up to bigger and better things,” Yvonne said. “We show them how they can do that within Best Buy. And with all those people getting promoted, we’ve promoted people in-store to fill those positions.”

Merchant started in a store at 16

The average Best Buy employee has held three or four different roles in the company. In addition to promotions, Best Buy also offers employees opportunities to continue their development through transfers to new departments, training opportunities and specialized assignments.

Ryan Bernhagen was hired as a seasonal employee at Store 245 in Apple Valley, Minnesota, when he was 16 years old. And over the next 16 years since, he rose from an electronics salesperson to a senior sales manager to a merchant analyst.

Ryan’s jump from the stores to corporate came in 2013. He had developed a reputation as a tenacious self-starter, skilled salesman and passionate problem solver — skills he learned while on the sales floor as a teenager.

“When I started at Best Buy, I learned to view every opportunity as something that could be developed into an even bigger opportunity if I let it,” Ryan said. “I realized early on that I wanted to help pick out the products that Best Buy puts on its shelves, but I didn’t realize how attainable that goal really was.” 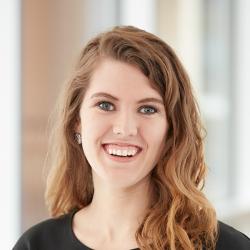