On the afternoon of June 14, 1981, a tornado slammed into the Minneapolis suburbs, mere miles from where the Best Buy corporate headquarters now stands.

The twister churned for 26 minutes, all wind and fury, cutting a swath north and east for 15 miles. When the skies cleared, scores of homes, businesses and trees were damaged. One person died and 83 more were injured.

It was the most significant tornado to hit the Minneapolis-St. Paul area in 20 years — and its wake would change the path of our company.

The Sound of Music store in Roseville — the precursor to the Best Buy brand — was at the northern edge of the storm’s path and was walloped by the twister. Speakers, turntables and VCRs were strewn throughout what was left of the building and into the parking lot.

“It was the worst thing that could happen to us,” company founder Dick Schulze recounted in his book Becoming the Best: A Journey of Passion, Purpose and Perseverance.

But, he added: “It was the best thing that could happen to us.” 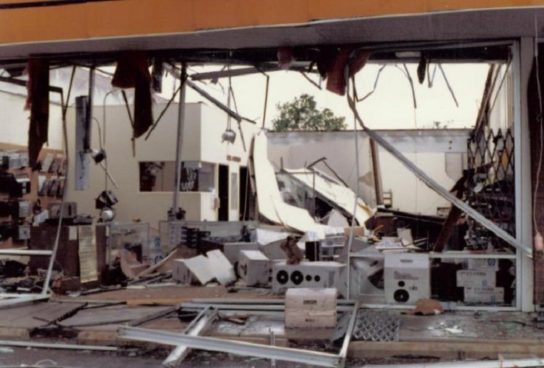 Time for a ‘Tornado Sale’

Within a couple of hours of the store being ravaged, nearly all of the 65 employees of Sound of Music rallied together and showed up to help sort, clean and salvage the things that could be saved. They loaded their trucks and vans, hauling what they could to the warehouse in nearby Bloomington.

It was time for a sale. The Sound of Music team knew it could greatly reduce the price of the damaged goods and sell them as-is. Unfortunately, it wasn’t that simple. Insurance adjusters assisted in reaching a settlement, but many of the products were too damaged to sell.

Dick decided to take the new sales strategy a step further. Why not, in addition to selling salvaged products, offer other great deals? Open-box items, display models, discontinued products and overstock could all be marked down, too. To create some added buzz, Sound of Music decided to hold the sale in the lot where the tornado struck and do it just six days after the destruction.

People wanted to see the tornado damage — and to get the “best buy.”

And buy they did. Almost everything was gone by the end of the first day.

Dick observed a new type of retail, where some customers weren’t as concerned with brands and prices. They seemed to love the no-pressure style of shopping and buying, as well as being able to pick up and handle the products.

The Sound of Music crew took what they learned on day one of the Tornado Sale, along with additional inventory from the Bloomington warehouse, and propelled themselves into a second day of sale madness. In just two days, they moved a greater volume of merchandise than ever before – among all locations combined.

From this tragic event came the first glimpse at a new business model and a new perspective on the future. And, two years later, a new name: Best Buy.