Creating a culture of inclusion at Best Buy

At Best Buy, celebrating Pride stretches beyond the celebrations in June. It means more than raising awareness and support for LGBTQ+ employees and people in the communities we serve. It means creating a culture of inclusion where everyone feels welcome and accepted. From coast to coast, here are unique stories from some of our people who are helping do just that.

“We didn’t have as much opportunity to join the Employee Resource Groups (ERGs) at headquarters, but we still wanted to support the amazing initiatives happening there,” said Kathryn. “Seattle has a really strong LGBTQ+ presence, so I thought it would be a good place to start.”

With Seattle’s Pride Fest nearby, Kathryn ordered T-shirts and invited employees to attend. The response was positive, so the office sponsored the Queer Geeks and Gamers event at Pride the next year by providing TVs and gaming consoles. And employees volunteered to help with the tech.

“There were some kids playing one of the video games, and one said, ‘I didn’t know Best Buy supported the LGBTQ+ community,’” Kathryn said. “It was an a-ha moment. It’s an opportunity for us to make ourselves more known.”

But the purpose isn’t brand awareness.

“We definitely don’t want to do it in a way that’s like, ‘shop at Best Buy.’ We just want people to know we’re here, we’re part of this community and we support it,” said Kathryn.

Outside of Pride Month, employees participated in awareness and fundraising walks and volunteer events. 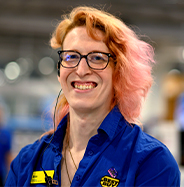 Erin Firth, a computing supervisor at a Seattle store who is a transgender woman, works with Kathryn to support Seattle employees’ involvement in Pride and other activities. But she saw an even greater need to engage store employees.

“I didn’t see much that was available to me as a store employee, so I decided to create a group,” Erin said. “I wanted to help both the internal and external community.”

With the support of her general manager and market leadership, the Pride Associate Mentorship Program (AMP) was created. Through quarterly meetings, emails, and an employee site, the goal is to empower members and educate them on how to better support the LGBTQ+ community.

So far, AMP’s impact has been real.

“One associate felt comfortable coming out as trans, and they’re transitioning at work,” said Erin. “Things like that keep me going.”

AMP started in Seattle and has expanded to Portland, and the goal is to have a presence in every market nationwide. 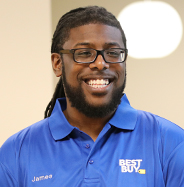 Since he started at Best Buy in 2006, James Millsap never felt like being an out, black, gay man was an issue with the company or his coworkers. The stores he worked at celebrated Pride, and leaders encouraged employees to express themselves in the workplace.

Still, as he rose in the company ranks — eventually taking on a role as a general manager in central Pennsylvania in 2013 — James felt an internal struggle arise as he looked around at his peers.

“I didn’t meet another black or gay general manager until I became one,” he said. “Before that, I had thought black or gay people only made it to a certain level. That was the story I had told myself. Then I realized they might be there, like me, but if they were, they were quiet about their identities. I thought, maybe I should start to be quiet, too.”

James found himself wrestling with being open about his identity with his employees while wrestling with issues of racism and homophobia that existed in the broader community outside his store. While his store’s performance was great, he found himself turning more and more inward emotionally and, in turn, became more unsettled with how he felt about his identity at work.

“I didn’t know how to have those hard conversations with my leaders,” James said. “So, I left.”

That was in 2016. Soon after, James realized he missed Best Buy’s inclusive culture and wanted to return to the company he loved, hoping he could lead in a different capacity.

Today James is a Training, Learning and Development leader in the Philadelphia, New Jersey and Delaware. In this role, he not only gets to participate in the hard conversations about what employees are struggling with — he leads them.

Through different programs, James is one of many people at Best Buy working to make sure the environment is one where employees can bring their whole selves to work and then make better connections with customers.

“As a company, if a conversation is difficult, we’re no longer hiding from it,” James said. “Conversations about identity might be difficult or even messy, but they only serve to make the company’s culture better. In this way, Best Buy strives for more inclusiveness and that makes working here a little more perfect.”

‘It’s important for me to be visible’ 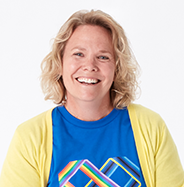 When it comes to inclusion and bringing your whole self to work, Kristi Wraspir believes it’s important to set an example.

Over the years she had worked at other places, she hadn’t felt fully comfortable sharing who she was. “Even having simple conversations about what I did on the weekends and who I spent my time with were sometimes awkward for me in the past. I was never quite sure how it would be received and knew that culturally it was an iffy situation,” she said.

But when Kristi started with Best Buy in 2011, she decided she would be open about her personal life and being a lesbian.

At Best Buy, she found top-level leaders who support diversity and inclusion, whether that’s the LGBTQ+ community, women in leadership, recognition of mental health issues or others.

“As someone who’s in a leadership position, it’s important for me to be visible, show who I am and be proud,” said Kristi, a director in the marketing department. “When people see and hear that you’re walking the walk, it means a lot more.”

She’s involved with Best Buy’s Pride ERG, as well as a women’s mentorship circle, and she co-leads a newer committee in the marketing department focused on weaving diversity and inclusion into everyday work. They do everything from bringing in speakers from diverse backgrounds to broadening the types of celebrations that get recognized within the department.

As a company, she thinks Best Buy is on the right track. While having an open and accepting workplace is just the right thing to do, Kristi said, there’s also a clear business case to be made.

“Like our nation, our marketplace is diverse. The more inclusive you are and the better you are at representing all walks of life, the better chance you have of resonating and expanding your market,” she said.

To learn more about working at Best Buy, visit our Careers website.