“We had all hands on deck, waiting to see what would happen,” recalls Agent Bork, who was one of about 10 full-time Agents at the time.

The problem — made prevalent in headlines in the months leading up to the new year — was that computers only processed dates in two digits, which meant that the coming year 2000 would be indistinguishable from 1900. Some feared that glitch would cause computer systems to melt down at midnight.

In the end, it wasn’t the technological apocalypse some had predicted. But it was still an important moment in history for Geek Squad and Best Buy, which would join forces two years later.

For the 20th anniversary of Y2K, we chatted with Agent Bork and a few other longtime Agents to reflect on the computer crisis that never really happened.

Geek Squad started preparing for Y2K more than a year in advance. Agents researched and tested different hardware and software to make sure they had everything they needed to know to keep it all working.

“We took it really, really seriously. It was an exercise in planning for the best but expecting the worst,” said Agent Bork, who is no longer with the company. (In Geek Squad terms, Agents refer to that as “sleeper status.”) 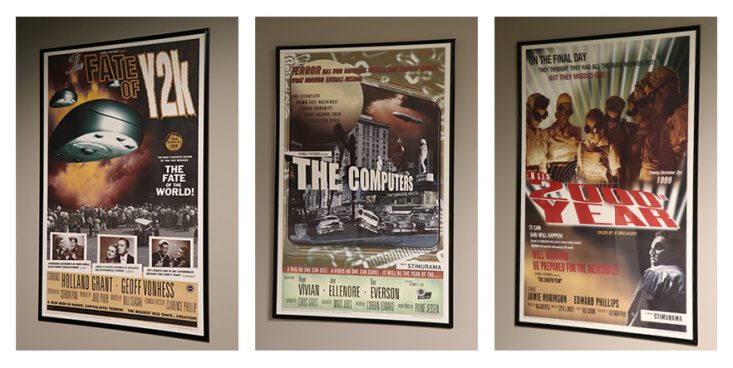 Geek Squad made 1950s-style comic book posters that they planned to use for advertisements at bus shelters, but they scrapped the plan because they were getting so much free press at the time. Those posters now hang on the wall at Best Buy’s headquarters.

Throughout the year, Geek Squad kept busy with hardware updates and software patches for its clients, even offering a service to certify them as “Y2K compliant.” They advised clients to back up all their data and to go further to print out anything that was particularly critical.

“A lot of it was common sense,” said Agent Ryan Smith, who has been with the company for 22 years. “Keep all your data backed up and install software updates.”

Things were busy at Best Buy, too. Our tech experts recommended that customers should get a computer tune-up to ensure everything was updated and ready to handle the issue. At one point, there was a backlog of almost two months.

“A lot of customers were concerned that they were going to lose all their data or that the hard drive was going to fry,” said Agent Shawn Lundin, who managed the “Tech Bench” at a Best Buy store in Minnesota at the time. He has been with the company for 26 years.

For several months leading up to the new year, every computer that came into a Best Buy store received a sticker reminding the customer to turn it off before midnight (pictured above).

Agent Smith recalls crowding around a Windows 2000 server during a New Year’s Eve party at a friend’s apartment in 1999. They watched to see what would happen when the clock struck midnight.

“If I recall correctly, the computer crashed but worked fine after we rebooted,” he said.

“I wasn’t a doomsday-scenario type,” he said. “I didn’t think planes were going to fall out of the sky or anything like that. … I remember kind of laughing at the hysteria.”

Nonetheless, Geek Squad kept busy with minor maintenance and cleanup for weeks after.

“Something would be funky with a computer, and the first thing the person would think is, ‘Oh my gosh, this is Y2K related,’” Agent Bork said. “Sometimes it was related, sometimes it wasn’t.”

While the night was uneventful for many, that was thanks largely to the massive worldwide undertaking that went into updating computer and networking systems, large and small, in the months leading up to it. And experts say the growth in internet-ready systems at organizations and the boost to software companies at helped spur much of the current boom in tech.

It was also an important turning point for tech experts like the Geek Squad.

“It was the first time that your smaller businesses really realized how integral information technology was to their success,” Agent Bork said. “It was a good time to learn the basics of proper IT hygiene.”