Parents Are Way More Tech-Savvy Than Their Millennial Kids Think

But, when it comes to technology, parents might understand more than their kids think, according to a new survey conducted by Best Buy.

Less than one-third of millennials think their parents are very comfortable buying the right personal tech for themselves. Their parents strongly disagree, with 66 percent saying they do just fine on their own, thank you very much.

And while almost half (47 percent) of millennials say their parents turn to them for tech help at least once a week,  parents say they’re not nearly so dependent on their kids: Only 17 percent said they seek help from their kids that often.

“We’re often told that young people are more interested in and know more about technology than older adults, but that isn’t necessarily true,” said Geek Squad Agent Derek Meister. “This survey reinforces what we see every day — parents are often tech savvy and seek advice in very different ways.” 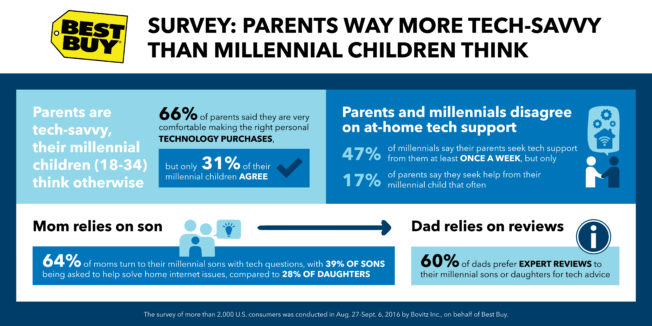 Here are a few other things we learned:

Of course Best Buy Blue Shirts and Geek Squad Agents assist people of all ages with technology, and are just a click or call away.  Help for every technology is available at approximately 1,400 Best Buy stores nationwide, as well as online, by phone and in-home.  For more information visit www.bestbuy.com (embed link).

* The Best Buy Parent-Child Tech Survey was conducted from Aug. 27 –  Sept. 6, 2016, among 2,000 U.S. consumers. About half of the respondents were parents of adult children and took a “parent” survey; the other half were children aged 18-34 with living adult parents and took the “adult child” survey. The margin of error was +/- 3 percent.