Tech Talk: How Domino’s Changed the Way We Order Pizza

It wasn’t long ago that you had to actually pick up the phone to order a pizza. Then the industry transformed with the advent of online ordering.

Now the process is completely digital. You need only open an app or tweet a pizza emoji, then wait for your food to arrive.

The increasingly simple art of ordering a pizza is yet another example of how tech is changing the way we live and communicate — and Domino’s has been on the leading edge of the trend. It now offers 13 digital platforms for ordering a pizza, including smartwatch apps, Facebook Messenger, Google Home and a zero-click app.

The Best Buy Blog sat down with Domino’s Chief Digital Officer Dennis Maloney to learn more about how the pizza chain has evolved into a tech company in recent years.

When did Domino’s start making its tech push?

In 2010, we launched our entirely new pizza. We basically redid everything, including the crust and the sauce. At the same time, we went on a big push toward digital. So we changed the product and the way we sold the product. We used to be a pizza company that sells online, and now we’re becoming an e-commerce company that sells pizza.

What percentage of your sales are digital now?

More than half of our sales come through our digital platforms, and more than half of those are mobile. We’re really focused on creating great experiences and using tech to deliver them.

How have consumers responded to your digital innovation?

It demonstrates to our consumers, especially millennials, that we’re willing to do whatever it takes to deliver a really good pizza experience. So, if you’re someone who really likes to tweet, you can now order a Domino’s pizza using Twitter — and you can do it using a pizza emoji. Millennials get it. I think they give us a lot of credit for that, and it helps them identify more with the brand. 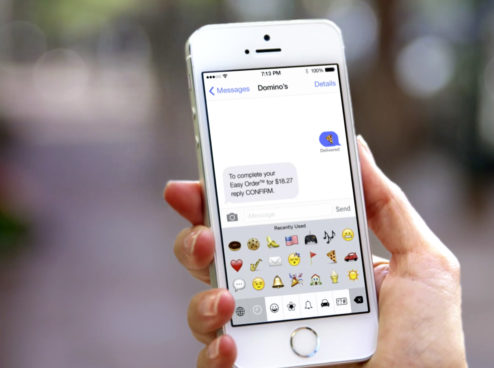 What are some of the digital platforms you’re using?

We were one of the first companies to have a voice interface in our apps. We were one of the first to do Twitter ordering. And we have a zero-click app that allows you to order without basically doing anything at all. Pizza’s fun, so these things should be, too. It’s about pushing the boundaries to create fun experiences that reinforce who we are as a brand. These should be things that move the brand forward in a big way long-term. Plus, they’re fun to work on.

How have employees responded?

It makes a big difference when you can show that you’re doing these really cool, innovative things, because those are the types of things people want to work on. They want to do something interesting and that makes a difference. It also helps with our franchisees because they see Domino’s in the news and hear their customers talking about us as a brand that’s young and hip and cool. That helps them get employees and makes them feel better about working at the brand.

You mentioned millennials. Are young people the only ones using this tech?

My boss likes saying that our target market is anyone with a stomach because almost everyone likes pizza.  Millennials are the ones using some of the newer innovations, like the ability to order on Facebook Messenger, and the older generation orders on their laptops and desktops. Pretty much everyone now has gotten used to ordering digitally.

Is it more about meeting your existing customers where they already are or is it about finding new customers?

Part of the audience is very tech-savvy. They’re the early adopters who are willing to try new stuff, even if it’s a little cutting edge. Then there’s a whole other section that’s like, ‘Wow, that’s awesome, but I’m still going to order with my app because that’s what I’m familiar with.’ But they’re moving. Each innovation changes the overall experience, and we start pulling those learnings back.

Can we still just pick up the phone?

For 50 years, that’s how everybody placed an order. In a lot of ways, we’re circling right back to that because of the voice assistants. You can easily see how, in another couple of years, you’ll get in the car and think, ‘Maybe we’ll get pizza.’ And the car will say, ‘I can get you pizza. Do you want your normal Domino’s order?’ Technology is changing so fast it’s crazy. Every time we think we’ve really changed the consumer experience to make it as easy as we can, we come up with another two or three ways to make it even easier. We’re nowhere near finished.

And you were early to voice, right?

We launched our Dom virtual ordering assistant at the same time Apple was doing Siri, Google was doing Google Now and Microsoft was doing Cortana. It was three of the big tech players and Domino’s. People were like, ‘Wait a second, you’re a pizza company. What are you doing?’ It was like, ‘You don’t get it. Voice is going to be the interface of the future, so we need to start learning about how it’s going to impact our business.’ We have to keep ahead.

So, what’s next? How far out are you working?

We literally have a list of projects as long as my arm. It’s funny, because we were worried we’d run out of stuff. We’re working on projects for this year and next, and even a couple that are in the three- to five-year range. We’re going to be pretty busy, which is good.

Tech Talk is an occasional series that explores the intersection of tech and life.