Von Miller is one of professional football’s hardest-hitting defensive superstars. He’s a fashion icon and TV star. And he’s a self-proclaimed geek with a badge to back it up.

Von, who was deputized as a Geek Squad Agent last year, stopped by the Best Buy Corporate Campus in Richfield, Minnesota, on Friday to talk about football, tech and pose for selfies.

We sat down with the Super Bowl MVP for a few minutes to chat about his life as a geek, his favorite tech and what it’s been like to team up with Geek Squad.

On life as a geek…

Have you always been a geek?

Yeah, since Day One. I wasn’t interested in action figures and things like that. It was the tech toys. I wish I would have applied myself more when I was younger and not strayed from it, because now that’s all I do. I just sit and research.

What type of tech were you into as a kid?

I always liked cameras, probably as long as I’ve liked gaming systems. And I always liked radios, subwoofers and the technology behind sound.

Probably my phone. We spend so much of our lives on our phones, and there are so many things you can do with them. I spend most of my time watching YouTube videos, social media, finding new music or checking my schedule. It’s a computer really.

When your team is on the road, what tech do you bring with you? What’s in your carry-on bag?

I always have to have my Bluetooth speaker with me. I like how you can turn any space into the locker room, basically. And, of course, I have my phone and my Apple Watch. Tech is just so integrated into our everyday lives now.

How do you and your team use tech for football?

We record everything, from meetings to practice. Small movements and foot placements make all the difference in a sport where you have 200-pound guys running 20 miles per hour. If one movement is off, the guy is gone. You have to be able to watch yourself and improve your technique. We watch a ton of film. 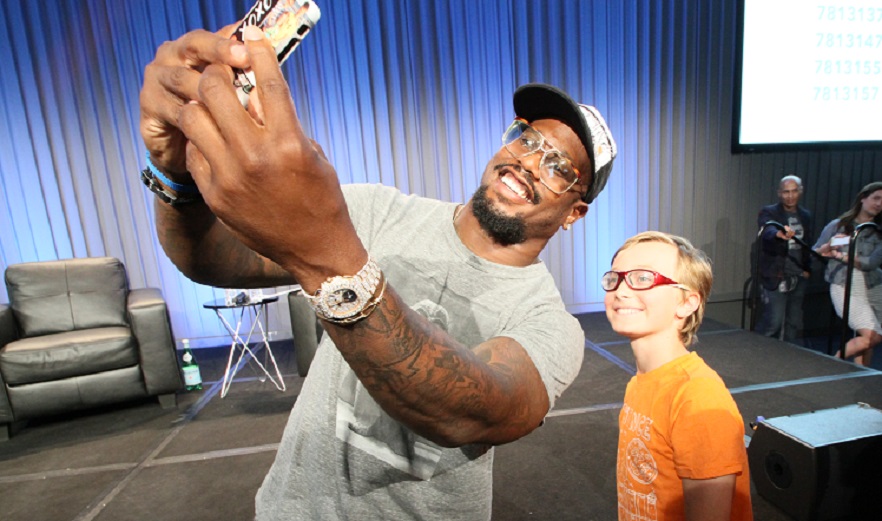 On teaming up with Geek Squad…

Why did you decide to team up with Best Buy and Geek Squad?

I heard they were refreshing the Geek Squad brand, and I thought, ‘There is nobody better than me to represent the Geek Squad.’ I think it was just sent from heaven. I’m a geek, and the timing was perfect.

What has it been like to be a Deputy Geek Squad Agent?

When you start talking with these guys about tech and phones and computers and what’s coming out, it really feels like a family. You get to talk and share information. That’s the best part about it for me. It doesn’t feel like a job or obligation. It feels like an amazing opportunity to spend time with like-minded guys.

You’ve had a chance to go along on a house call. What was the best part?

Just seeing it from behind the scenes. We’ve used Geek Squad before to put in our TVs, but you don’t really pay attention to what they’re doing. It was cool to see it all from the ground up — the tubes they use, finding the Wi-Fi signal, finding the perfect position for routers.

Sometimes tech is pretty self-explanatory. When you investigate and use trial and error, you can figure out anything if you have enough time. And if you don’t know something, you can always go on the Internet and figure it out.

You set your mom up with a bunch of smart home tech. How’s Momma Miller liking it?

My mom has always been tech-savvy. I guess that’s where I got it from. She loves the Nest thermostat, because it tells you how long it’s going to take until the room gets to the temperature. She loves that.

On chicken farming, fashion and dancing…

What are your hobbies off the field?

Travel. I like to go fishing with my little brother and my dad. But if I get a couple hours, I like to just research stuff. I hate airplanes because you have all of this free time, but the internet isn’t always what it’s supposed to be, so you’re just sitting there and listening to music. But if I’m traveling in the car, you can always get on your phone and knock out a lot of stuff.

If you weren’t a football player, what would you be?

I would probably be Von Miller the chicken farmer. But, growing up, I always had this confidence that I could do whatever I put my mind to. I always believed in visualization and really putting yourself in the moment. If you put your mind to it and you work hard enough, it will happen for you. I still use that today.

How’d you get into chickens?

At Texas A&M, we had all of these crazy classes you could take. It started as an easy class, then you take another class and another class — and, before you know it, it’s my major. I just fell in love with chickens and the whole lifestyle chicken farmers have. It’s a peaceful lifestyle. You always try to think about things to do after football, because you never know it’s going to be over. And now I’m starting to look at goats. I just started to research Nigerian dwarf and pygmy goats. They’re the best. You have to look at the YouTube videos.

Is it harder to chase down a chicken or a quarterback?

Chickens, for sure. You can’t really predict which way they’re going to go.

You’ve developed a reputation for being one of sports’ most fashionable stars. How’d you get into that?

I just buy what I like and put it on. If I’m Von to the fullest, there isn’t going to be another Von. There’s only one person with the vision I have, so I take that into what I wear. I just wear what I like, and it’s different than what everybody else is wearing, so people think that’s cool. It’s the weirdest thing to me.

Is that the same approach you take to dancing?

I’ve always been goofy. I can’t really dance, I just try. If you put energy into it, it works. Anybody can dance.

Can you go anywhere without people recognizing you?

I know some celebrities hate it, but I love it. It makes me feel good to be who I am for all of these kids and fans. If I didn’t like the interaction, I should just stay at home. Whenever I’m out, I just try to be the Von Miller everyone sees me as.

The Big Game is here in Minneapolis next year. Will you be back?

If I’m not on the field, I’ll be working the crowd. I’ve been to every [Big Game] since the year before I came into the league. I think it’s been eight straight years now. It’s just a huge event, not just for the teams on the field, but for everyone in the league. In our sport, there’s nothing bigger.