At Fortune’s Most Powerful Women Summit on Wednesday, Best Buy CEO Corie Barry talked about her journey to the top of one of America’s largest companies.

Corie, who became Best Buy’s fifth CEO in June, recently ranked No. 18 on Fortune’s list of the Most Powerful Women in Business. This is her first time on the list.

Here are a few highlights from the event held in Washington, D.C.

Corie’s love for retail started early in her childhood while traveling with her self-employed parents who were artists selling their work.

“I loved the passion and the ethic they had, but it’s very organic,” Corie said. “It’s not easy, and for me, it definitely made me crave some more structure.”

She decided she wanted to take a different path. Jokingly, she stated she might be the only person whose parents were disappointed when she told them she wanted to become an accountant early in her career.

“They had these huge hopes for perhaps picking a path that they felt like would change the world, and now, interestingly, that is exactly, I believe, fundamentally, what my path has allowed me to start on,” Corie said.

On the future of Best Buy…

As CEO, Corie is shaping Best Buy’s Building the New Blue growth strategy. A key part of that is our desire to create deeper relationships with our customers.

“We want to be that person who helps you unleash the cool and just makes the stuff work for you when you want it to,” Corie said.

We’re also expanding in new spaces, like health, where we believe we can help seniors age in their homes longer with the help of technology. It’s an area that’s near and dear to Corie’s heart, as she and her husband are caregivers for her 100-year-old grandmother.

“The world — and technology in the world — is changing so rapidly, and the idea that our health is going to be disrupted in a positive way by technology is a very real one,” she said.

Corie was motivated to improve herself and grow in her career. That drive propelled her to her role today: the youngest female CEO in the Fortune 500.

“I wanted the CEO job. I worked hard to acquire the skills that I thought would get me ready for it,” she said. “I don’t think anyone, at the end of the day, really expects someone to look you in the eye, and say ‘You’re going to be the CEO of a $43 billion company.'”

At Wednesday’s event, Corie encouraged other women to take on new roles and challenges outside their comfort zones. She also shared her belief of defining your purpose and connecting it to your work and all aspects of life.

“My purpose is one of stewardship. I believe strongly in leaving the company better, my family better, the community better, because I was there,” she said. 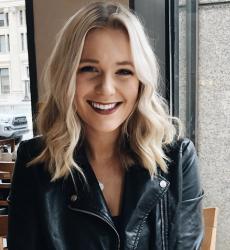